“hanging in the nothingness” on some “meiður”
Not a man hanging in a tree at all.
It is a man transcending the sphere of thought, time and space.
A vital point of vor forni siður (/our ancient tradition).

We shall skip our common literalism (–which is mere illiteracy–),
find allegory, symbolic language, and the profound theosophy
in rúnatal (last part) of Hávamál

Edda, Norse myths and poems, contains the abyss of meaning and pure spirituality  —  once we become literate.

Here we have Óðsmál translation from Icelandic of vísa 138 – 141
in the Edda-poem Hávamál, 3rd part (last part), part of wisdom, rúnatal,
all about how to transcend thought, and space-time,
to the realm of The Great Womb, ginnungagap within,
which is our pure consciousness: 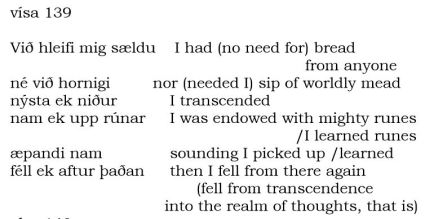 And the poem goes on to tell of the benefits of transcending
to nourish and nurture life of man in his present body
on his evolutionary path towards enlightenment.

Vísur 138-141 speak to us in past tense, told afterwards, because there is no human thought in the 4th state of consciousness, transcendental consciousness.
But the benefits come into human life.

-What is that 4th state?
-Transcendence is termed “the 4th state of consciousness”:

The first 3 states on this picture are the 3 states we know:
thinking, deep-sleep, REM(/dream)sleep,
and then we see the 4th – of which we might have heard, but never really understood. This is transcendence. The true core of þeosophy and philosophy, to know oneself. gnoþi seauton: ΓΝΩθΙ ΣΕΑΥΤΟΝ .
Óðinn given to Óðinn, I given to myself.  (Hávamál).

What has gotten lost, is the understanding of the pure þeosophy contained in our priceless cultural heritage, Heathenry, Paganry.

What is this “hanging in the nothingness”, on some “meiður” (Hávamál: ek hékk á vingameiði)?

It is not a man hanging in a tree at all. It is a man transcending the sphere of thought, time and space.

The number 9 here indicates timelessness.
9 nights means = no time, or: time is not here and now.
In Norse mythology, 9 is our mystical number.

Sleipnir, our human nervous system, is our vehicle on which we easily glide between Miðgarður (world of men) and Ásgarður (sphere of gods, ragnasjöt, tívatún),
or as physics terms Ásgarður: Unified Field of Total Natural law.

Óðsmál explains this vital point of vor forni siður (/our ancient tradition), which seems to be lost, or misunderstood.

We simply should learn how to nýsa niður, perform a valkyrja, which is the act of transcending.  Óðsmál recommends: TM® for easy natural effortless immediate transcending:   tm.org  and  tm.org/learn-tm

Now, what should I bring?

You are the fórn, the sacrifice, Govinda. Nothing else. There is no other gift to bring.

I am the gift, the fórn, which I bring – fully alive, of course.

Our individual Self is the gift we bring to the feast at Ægis, when we transcend into the abyss of our pure consciousness.

Mind easily becomes a tiny flame pending in nothingness, and automatically expands, to become the huge wave of Iðavellir (consciousness in motion), become Glaðheimar (the widest and gladdest boundless eternity).

Nothing is more natural to mind – once we learn how to lure mind to take a 180° U-turn from relative thinking into its own nature: pure bliss.

Nísta ek niður (Hávamál). Sanskrit nistha means “grounded in That” – in the abyss within.

We only have to learn how to nýsa niður – effortlessly, automatically
– as is taught by our wise forefathers in Hávamál: “nýsta ek niður”
(–I spied down, peeped down, nosed down–).

Nýsta is the past tense of the verb nýsa  —
Why the experience is told of afterwards (inevitably), is, as during transcendence there is no thought, only the “now” in thoughtlessness.

When we “fall from there again” into the realm of thinking, our brain starts to think again  –  now having imbibed some orderliness and fimbulrúnir.

Our goddess Rán (pronounce Raun) is the perfect orderliness in Ægir, the abyss.
The perfection mirrored from our all-pervading ginnungagap into our life, and to our universe. Our forefathers knew this science!

We also have the words sími (thread) and seiður (shaman-luring).

And terms for the gods: höft og bönd (religare, bind together).
This indicates connection to the innermost.

Nýsa niður is how we reach Ásgarður within,
live the sphere of the Laws of Nature, the flawless and all-powerful.

Now we shall also learn to see Hávamál in 3 parts:

Karma कर्म (Sanskrit) means action.
उपासन कन्द upaasana kanda – middle part – learn
– to sit at the feet of the master, the teacher of spirituality, listen, and learn how to transcend thought.

That is what Loddfáfnir (in Hávamál) is doing  –  but mind you: he will benefit from the wisdom only  —  only —  if he really understands, and learns to transcend realm of space-time, and thinking:
þér munu góð ef þú getur, og þörf ef þú þiggur.

dñjanakanda झन कन्द   – the third part – the part of wisdom.
Here is where most of us fail. We are brought up in literalism, and belief in the letter, brought up on the sphere of thinking and feeling only.
But the 3rd part is purely theosophical. Pure heathen/pagan spirituality.  That is why some talk about shaman here.
This is not about the sphere of thinking, not on mundane space-time.