chatter 15   Gungnir   Frigg    and our symbolic servants in life   —  names derived directly from sanskrit into norse mythology     —  symbolic language of myths and kvæði, allegory in god-spells 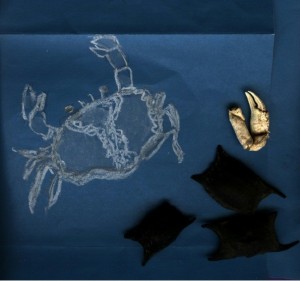 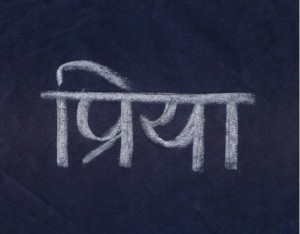 Sanskrit priyaa is Frigg, meaning: the revered one, the beloved one 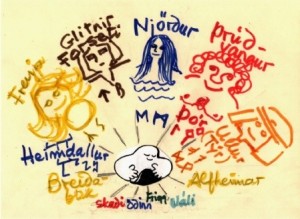 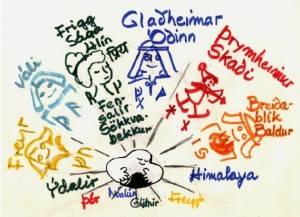 and the symbols are endlessly divers and some have many many levels of meaning; there are many layers of meaning in each on symbol
admit that we understand according to our stage of understanding only

we should know:  we understand stages that we have been through, but we do not perceive those above, those who are waiting for us 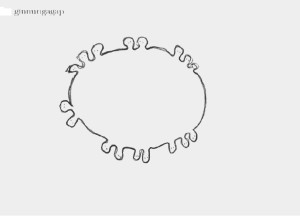 ginnungagap does not encourage us to live a spiritual life;  the responsibility for our life and the progress to perfection and the support of evolution, is all in our own hands

we are It, pure consciousness, ginnungagap, so being It is easy, living It in our life is easy  —   but yet not all of us know this Truth! 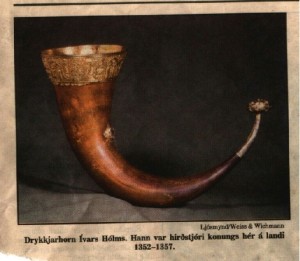 in myths sometimes called blood  – but be aware:  flow of blood in myths is the free flow of consciousness,
(not real blood of killed men at all –  we should learn to understand symbolic language of myths) 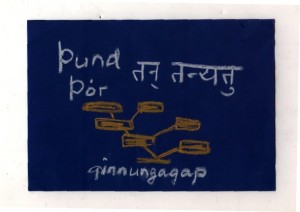 Þund the river  — but there are countless rivers in Norse mythology —  is the flow that upholds the universe, dharma

nothing is stagnated, all is moving, and the aim and purpose is evolution towards perfection

why rivers?
rivers come from mountain-springs, flow to the ocean, surface water evaporates, becomes clouds, and rains in mountains, to form brooks and rivers again  –  a cycle, a nourishing one

we, as mankind, as individuals, are evolving, and life nourishes for that purpose  –  our cycles carry us forward – evolve,

perfection as a goal of life (Sanskrit meaning siddh-artha), not a man with a hat of sloping brims (Icelandic meaning síð-höttur) 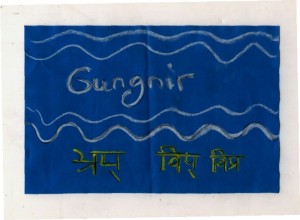 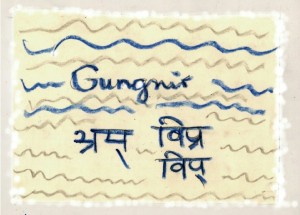 Gungnir, spear of Óðinn, weapon of consciousness, is vibrations; 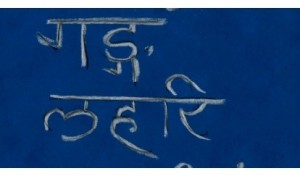 Gangleri, gangalahari,  sanskrit: the wave of wisdom from the river (symbolic) Ganga
Gangleri is one of the many many names of Óðinn – Icelandic meaning: he who walk and travels 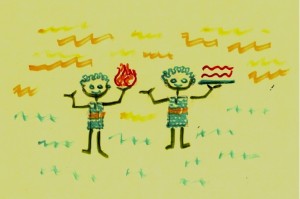 Eldir and Fimafengur the servants of Ægir at Ægis,
Ægir, the huge unfathomable abyss of waters being metaphor for the abyss of consciousness
we have to understand names
as Eldir has fire, cooks for us, perhaps the fire of knowledge is lit,
the other one, Fimafengur, quickly brings all that we need;  —  and what do we need in Ægir, consciousness ????
it is not about a fiesta where man eats and drinks worldly food for his body!
in the feast at Ægis we have spiritual “food” 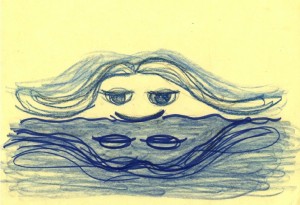 and Vilbjörg mun vaka (will be awake):  we gain liberation from the bonds of matter and energy, from the binding influence of the objects of the senses, and we now go in for higher qualities in life

we become deep and profound as the abyss of Ægir (the mighty life-giving ocean), and cannot be easily moved —-  not easily moved is the deep ocean
but we are liquid-like, ever moving, as the ocean, with little waves on top (thoughts in the world), huge waves inside (the source of thought) 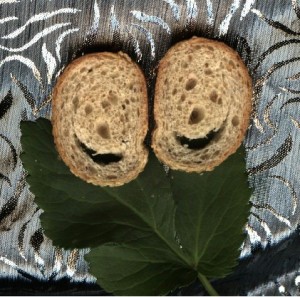 Byggvir and Beyla, servants of Freyr the symbol of peace, abundance in material life, wellbeing, progeny, fertility and prosperity

bygg is barley, and Beyla is the maiden that kneads the dough for our bread

personifications are amusing and lively, but some men (listeners of the teaching) are on a low state of consciousness, and, unfortunately, taking the personifications as people, real people in some abstract life

we have art-pieces that show gods and goddesses   – as is found in Greece and other places
we have paintings of valkyries carrying on horseback dead bodies of fighters from the battlefield to the sky
this has become a dangerous distortion – valkyrja serves for transcending the sphere of time, space, and thoughts

Sleipnir, a horse, vehicle, is our nervous system on which we glide inwards to Ásgarður (sphere of gods)

valkyrja is a performance in our consciousness, and act

valkyrja we perform fully alive, and leaving the body is dyaana (see chatter 1), Óðinn given to Óðinn for a while, NOT a death of a body

we have to understand the names

all names (of people, domestic animals, places)  in Icelandic have a meaning, —  as names did in all languages long ago, but some have lost it —  and we have to understand the meaning of the names in myths

— sometimes more than one meaning to each one!!! —

—  otherwise we cannot “read” and understand the personification

—   sometimes we feel that our old understanding is good enough and no need for any depth and additional knowledge  —   but listen!  our forefathers’ wisdom can be very practical in daily life

so:
by all means have personifications and enjoy them
but do not get into the dangerous trap of seeing them as people

and:
how are we going to explain the things and phenomena that we do not see with our worldly eyes, if we do not try to speak language that others understand?

how many will understand the allegory?  how many take everything literally?