look at this
Brynhildur valkyrja has been stung by thorn of sleep by Óðinn (consciousness);
we shall have to wake her up — by a kiss of love, being a prince (compare the Sleeping Beauty story)
goddess Syn is synjun (refusal) of ignorance;
the ignorant man, living in the objects of the senses only (as Gerður in Skírnismál – hrímþursar (stagnation)), does not make any progress on his spiritual path to Valhöll;

engin jól (no yule), no wheels, no yule;  stagnation – (in the Sleeping-Beauty-story for a 100 years) – but they might be some millions of life-times if we do not realize what life is for 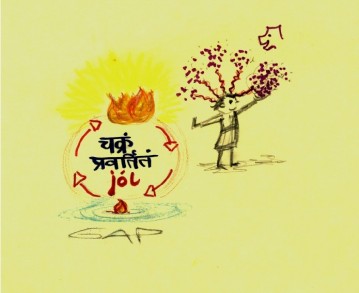 some men have no time for divinity inside; they refuse evolutionary cycles.
their eyes see matter, so they take that for real, not knowing where from it (the matter) and the I (the real core and essence of men) comes
if we do not nourish ourselves by giving Óðinn to Óðinn (individual self into universal Self; Hávamál) our whole body and whole life suffers   —  our decisions become weak and not supported

some might claim not to have time for this god-rubbish, but actually is saves time;
-how?   how can spending time save time?
-we gain the support of the laws of nature, the gods, we live in tune with the great flow of the universe, and life becomes easy and supported, and spontaneously right

if we do not nourish ourselves, we suffer from deficiency of the great power that abides inside

we live in this vicious cycle of seeing material only, not knowing the seed of actions sprouting in our heart

Þjóðvitnir (top right on the above pix, laughing; his business in the age of ignorance is to offer stuff to the ignorant ones)

Þjóðvitnir stands (in the age of ignorance) for the lure of matter, and the mistake of our intellect, and we are “his fish”;

we get an idea, but we do not know that it has correlation and support from old ideas that are rooted in our heart;
what happens to us leaves impression, the impression shoots roots as a seed of memory,
it becomes the incentive of new ideas, giving the urge to perform……

longings and desires keep life going (so they are good), but, some longings are base, we know;
desires should be pure and evolutionary, but are not always  —  because we are cut off from our very source

some impressions are those of anger, and new ideas are fuelled by them;

we act, that leaves an impression which colours and shapes the new idea …  etc  – we act, and that leaves (unseen) seeds of memory

(bottom right we see former lives;  also memory of actions from those former lives leave impressions as a seed of memory, to have us carry on in the vicious cycle)

but there is a way out: 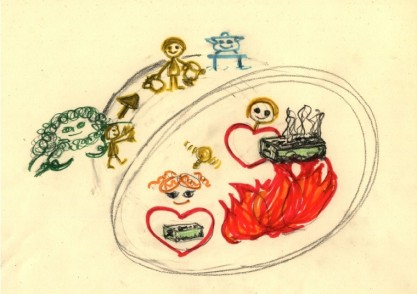 god Ullur is the fire of knowledge  —  by which we can roast the seeds;
then new ideas are no longer fuelled by past impressions

Ullur is within us, and we can kindle the fire of knowledge by transcending the world of matter;
easiest is to use the TM-technique, because that is tailored for the busy man in the world

(some systems are too difficult, not suitable for families and workers, and should not even be tried by the busy man in the world) 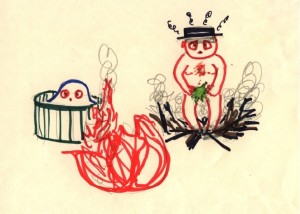 The ignorant man starts practicing transcendence, Óðinn given to Óðinn, —  and Ullur, the fire of knowledge, burns up Gymisgarðar / paradise which we carry from the animal stages into human lives 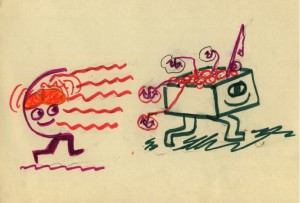 Þjóðvitnir (in his business now-a-days) has some beautiful bait for our senses, and we chase that stuff;

our senses register the created world only, matter and energy, and thoughts and feelings are all-worldly too;

note:  thinking about gods and divinity is a worldly thought only (–be very clear on this point–);
it is not living divinity within;  it is a thought only;

Gunni the red mad dog is rajo-guna out of bonds and out of equilibrium with sattva and tamah
(sattva rajas tamah, þursamegir III, are the 3 qualities of mother Nature, and they rule the whole world; the only way out of their domain is to be without the 3-guna for a while:  transcend)

hugur means mind,
tær hugsun means pure thought, in a self-referral state, thought experiences itself only,
Gungnir is vibrations, the spur of creation, the 5 different vibrational modes, which our 5 senses perceive
the gap (pronounce gaab) is ginnungagap, our source, origin, and real essence:  we are It ! 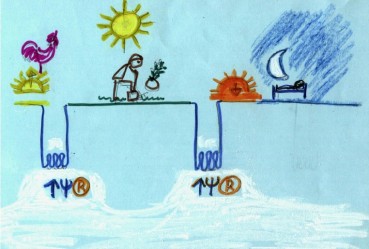 this is the daily routine; it is the evolutionary path to Valhöll (then reaching Valhöll in one of our live-spans, perhaps this one??)

institutions might claim to take care of good/obedient sheep
remember that shepherds — however good they are claimed to be — keep sheep to eat them, milk them, sell them, breed them for egoistic purposes;  but not out of much-advertised love.

do not become sheep, skip any shepherd over thee 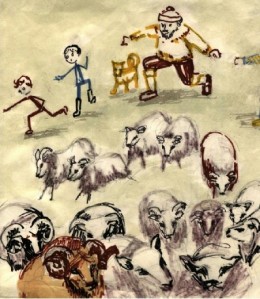 be responsible, thou lead thyself, never use
an intermediary/mediator to divinity;
it is a fake, a trap, —
the pathless path inwards is from me to me, as simple as that —  if we have the technique to transcend effortlessly and naturally —

loving the lambs is egoistic love 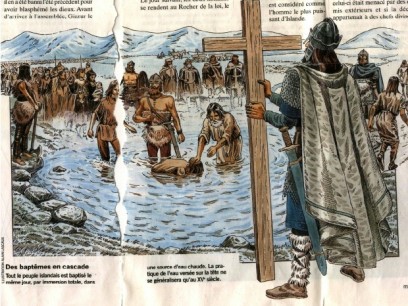 christianity was threat-imposed upon Icelanders in year 999CE;
we had the choice to convert or die  —  quite a choice, hmmmm?

it is wrong to say (as some do) that Icelanders saw the beauty of the advanced religion christianity and therefore let go of their primitive bad heathenry;
this interpretation is falsified history, used as a sharp tool for the embellishment of violence, power-greed, empirical ambitions, and threat of torture and death;

Þorgeir Ljósvetningagoði was a wise man and saved the lives of thousands of Icelanders by giving in to conversion, —  unwillingly though  — confronted by threat of the armed men sent by the greedy king, and sons of prominent men in Iceland held as hostages in Norway);
for those men murder was the path to heaven, for us a matter of life or death to compromise

Gundestrup — the famous……..
the yogi-position has been much contemplated on

the 3 yellow gods are Óður Hænir Lóður who bring humans the attributes of humanity;
“maður?” means that they are not all too sure if this man on animal stage can bear the name man;

below red line are animal life-spans, the blue Hel is the pause between life-spans;
the pink arrow(top):  all the lives as a human that await us

Óskópnir, that which has not yet been created;

below the red line life-spans as animals, and the breaks at Helia, our origin in the sea, our evolution for some millions of life-spans perhaps;

the real responsibility begins when we are born as men;
then we have free will, a sophisticated human nervous system (Sleipnir), and should (!!) know right and wrong and should be men enough to perform right action only