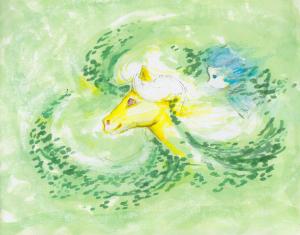 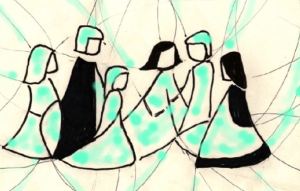 Elves, álfar, are channels in our body, shrota
and mythical channels into our innermost treasure.
We shall keep these delicate channels clear, as they are for the flow of life itself.
Álfheimar is the abode of Lord Freyr 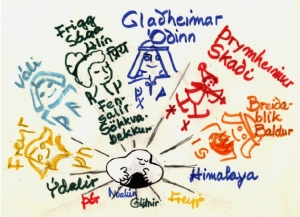 During the dark ages of Churchianity in Iceland, some tried to warn us against elves, even claim them and their elf-cliff to be a bad temptation which should be avoided at all cost by keeping tightly to Churchian teachings. Yet, there is somewhere a theory of a subterranean river as the bloodline of Jesus (through his assumed children, then), and also the Arcadia myth. (Compare also elves to holy sacrament in church, the blood to drink.)
To frighten us with the dangerous Nature, Churchians called her a man-devouring skessa. Much safer to show up in mass in church.

Perhaps the elf-treasure found within, along with our elves in Nature, was seen as some rivalry to showing up in church on Sundays.
Nature is joyful and attracts, mass was boring but compulsory (–life-saving, though, in the way that is was dangerous not to show up–).

In Icelandic elf-stories, elves help men, and men help elves.
In known elf-hills and -cliffs in Iceland, some kind of waves can be measured with sophisticated device, so it is not unlikely that some can detect them, their inside-light, with their naked eyes. I.e. see light in these known elves´ abodes, as some Icelanders claim to be able to do.

There are so many elf-stories in Iceland, folklore and also seems to be living belief in elves,
and ours correlate to elf-stories told by elderly people in other countries in Europe.