Our gods preside over the Laws of Nature, the flawless perfection mirrored in the universe from ginnungagap.
Gods judge not, punish not, have no wrath,
even if our myths are terribly funny, it means not that gods are guys and dolls like we. They are powers within us, easily accessible by “nýsa niður”*)
_______
*)  nýsa niður means: transcend the sphere of thought to the source of thought, transcend space-time to the origin of all.

*)  Compare also Rán (pronounce Raun), meaning perfect orderliness, Sanskrit rach.
Rán is in Ægir, the abyss of waters  — which we are in core and essence.

Our goddesses are many and have different roles in us, and for us:
Freyja our space-time foam bubble, our universe (as also is Afrodita).

Frigg in Fensalir, Sága in Sökkvabekkur.
Frigg, Sága (pronounce sauga), Hlín – our great goddess of all spheres of life
(note: Sága the seeress not to be confused with saga (a story))
Dísir of Frigg are Gná and Fulla. Amazing helpers.

Eir, meaning inner peace, for healing
Vár (pronounce vaur) for oaths
and many others, Sun, Sif, Syn, Mother Earth, Mother Nature (Óðsmál tells us all about them).

Sjöfn – from her name is “sjafni”, a lover, my beloved.

Einar Pálsson interprets Edda poem Grímnismál as the zodiac
(–to the great annoyance and jealousy of the scholars who did not see this, and in their wrath termed Einar: “An actor in the West-End of town ! What could an actor know about “their“ sphere of research!!“–) 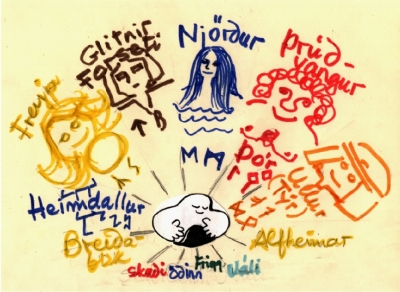 A man-made mono-god named God, rather fiery,
(masculine singular) – is old sun-worship. A son of god/sun, to include Gentiles/Pagans.  –  Sun is very hot down there; Sunday their worship-day.
There are more than one of these “only true one”-gods. Their owners/users usually ban all other gods. A 1st commandment: all the other gods banned.

Our Goddess Sun, enlightenment, is a female deity.
This goes for Icelandic and German, die Sonne. We find her within.
No intermediaries in Heathenry. We claim that stuff (mediators) to be a drastic mistake, made by some men who want us to be sheep.

Compared to our panþeon of gods, this He mono-god has been given attributes that seem to be taken from many concepts in ancient myths, and given many human tools to claim obedience. He is good, and wrathful, whimsical in his so-called “gifts”, said to be jealous too, and needs our money.
If someone tries to take him as some universal spirit, he should gravely consider all these non-spiritual attributes put on him. He looks more like a tool to rule in the hands of power-greedy men than some substitute of our ever-silent self-referral ginnungagap, our pure consciousness.
Ask for a clear definition of this particular term God if you go in for that business of belief and obedience to their mono-god rules.

If you hear (as an answer to a difficult question): -The ways of God are unfathomable, then know that this comes from the Bhagavad-Gita part of Mahabharata: “ways of actions are unfathomable”, gahana karmano gatih
गहना कर्मनो गतिः
That action-ravel is the business of our Natural Law Urður Verðandi Skuld, an action always has an equal reaction. What we do think say hits back.
No-one can run away from his (self-made) fate.

Our gods do not meddle up with karma, apart from presiding over all the flawless Laws of Nature.
Enginn má sköpun renna :  no-one can run away from his (self-made) fate.